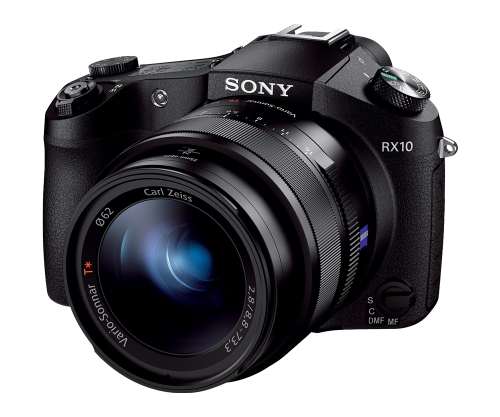 Yes, this blog is about the issues you deal with when a still shooter dips his or her toe into the movement pond, but sometimes you just have to shake your head at the advances in still shooting that mirrorless cameras with electronic shutters allow that seem to be glossed over or not covered (or maybe it’s just that I’m not reading that many stills blogs).

But there are four killer features on certain mirrorless cameras with electronic shutters that every still shooter should know about, and rejoice. Especially when you keep in mind that we’re talking about a sub-$1000 camera and lens combo that weighs next to nothing….

1. Shoot in Total Silence! Oh, if I had a nickel for every dress rehearsal, orchestra performance, house of worship, and play that I’ve had to shoot on assignment, trying not to make noise from the “ca-chunk” of my mirror and shutter and time my shots for music crescendos and applause, I’d be, well not rich, but much better off.

But no more…I can shoot like a maniac during any part of a concert or performance (given that it is legal or I have permission of the producers) without making a sound….literally, not making a sound. I don’t know why I’m not reading about still shooters on movie sets and photojournalists in courtrooms doing happy dances (if you’ve ever really tried to shoot with a Jacobson blimp, you’ll know what I mean—not for the faint of heart).

I mean, compared to the RX10, my old Leica M4 (one of the standards for “silent shooting”) sounded like a bazooka. Combine this silent shutter mode with the RX10’s  small, unimposing size, and you’ve got a very good combination for shooting in any sensitve situation where the sound of the shutter, or the very act of taking a photo, might cause upset.

Of course, if you want to spend $2+K to soundproof your DSLR and make it even bigger and bulkier, be my guest, and please, pick an expensive one like the Aquatech Sound Blimp by clicking here:-). Make sure you order a couple of lens tubes too!

2. Sync flash at 1/1600th of a second! Now that David Hobby has put his Strobist blog on the shelf to become a travel photography expert, there’s nobody around to get excited about syncing flash at this high a shutter speed. But what it does for you is allow you to work outside in bright sunlight with one small heavily diffused flash to get amazing soft light fill flash in bright sunlight.

You’ve probably seen the Strobist video of my buddy Joe McNally out on a desert dune with a tree full of speedlights to get enough power to shoot through a softbox for diffused fill in bright desert sun.    That’s what you have to do to get enough power to diffuse your light when you’re using the pulsing light of the high speed sync, the only way you can shoot a DSLR above the 1/250th second real sync speed. 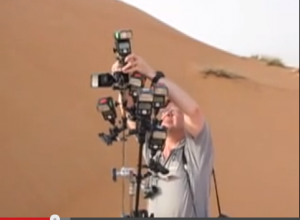 Joe is one of the best shooters on the planet and makes great pictures no matter what the obstacles, but what if you could just stick one flash unit behind an umbrella or in a softbox and do the same thing? Wouldn’t that be easier? Yes, it would be.  I had a series of executive portrait sessions outdoors recently, and I covered them with one SB 800 on a stand and the RX 10 in manual mode, syncing at 1/160oth of a second. I’m not contractually allowed to show those pictures, so I asked Peggy to stand in for a similar situation.

Here’s the way you do the same type of shot (soft diffused fill in bright harsh conditions) when your camera can synch flash at up to 1/1600th of a second! You only need one flash, and this SB800 was set to 1/4 power! 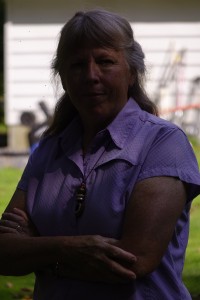 Peggy is in deep shade, and my white clapboard house is in full, direct, midday sunshine. 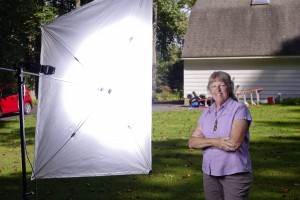 3. Shoot 10 frames per second! Yes, if you have one of the top of the line DSLRs you can get some pretty fast framerates for your sports sequences, but those things weigh a ton and cost a small fortune…but this little glorified point and shoot can do the same thing (albeit only for couple of seconds  at a time) at a fraction of the cost and weight.

I find myself more ready to try my hand at shooting sports in my travels with this camera and have gotten some excellent shots of surfing in Bali and bullfighting in France (well, it’s not bullfighting, it’s called a Course Camargue, and it’s like running before the bulls instead of fighting them with pikes and swords.) .

Here’s a quick, 2-frame-per-second timelapse of a series of stills I shot in a couple second burst…you’ve got a good chance of capturing a couple decisive moments at this speed:

So be sure to check out the fine print of any mirrorless camera you’re contemplating to see if these things are possible with your choice of camera, because, for reasons beyond my comprehension, most reviews and marketing material tend to gloss right over these useful, and dare I say it, revolutionary features for still shooters. And not every mirrorless camera sports all these features. My A6000 for instance, will not sync at these extremely fast shutter speeds, but above 1/250th at least.

So if the high speed sync is important to you, check the fine print. And if all these four abilities are important to you (as they are to me in some of my work), do check out the RX10…I first liked it for its amazing video capabilities, but the more I shoot stills with it, the more I like it as a stills machine too.

28 thoughts on “Four great still-Shooting feats my sub-$1K mirrorless can do that my $3K DSLR can’t….”