Whenever my pal Dr. Al Ruenes calls me to work on one of the humanitarian projects in Africa that he runs through his non-profit called ASSISTS, I know I’m in for a ride. So when he called me to document a project that he and some other medical organizations were doing that would create a training module for African surgeons dealing with the scourge of fistula, I said “yes” before he could finish the first sentence of his question.

Throughout the developing world, Vesico-vaginal fistula is a horrible, but repairable, condition that affects young women before and during childbirth. It results in social ostracization, poverty, and often death.

There are simply not enough surgeons in Africa trained to repair this condition, and Al and his colleagues were creating a PC-based training module that would be distributed free of charge to hospitals throughout the continent as a first step to training more doctors in the surgical technique to repair fistula.

My assignment was to film a “making of ” fund-raising video that would explain the scourge of fistula, and why it was vital to create this interactive training module to get more trained surgeons out in the field. The training production team, mostly doctors and medical equipment techs, would be filming surgeries in a step-by-step manner with high tech fiber optic cameras in the famous Hamlin Fistula Hospital in Addis Ababa, as performed by their expert surgeons.

Well, it sounded like a challenging project, but nothing I couldn’t handle….until I started hearing about the restrictions.

Even though we had official permission from the Hamlin Hospital, they could not help us in the event we were stopped by Ethiopian customs and immigration, who can get very touchy about film crews entering their country. So, yes, I would have to go with minimal equipment so I would look like a tourist if stopped.

And Al always brings a slew of medical supplies with him to Africa that he leaves with the host hospital, so most of our checked bags would be filled with sutures, spreaders, clamps, and other arcane surgical paraphernalia that are in short supply in the developing world.

And while that stuff doesn’t look like tourist gear, either, in the event we were stopped, you’d be surprised at how doctors and their gifts are so much more welcome than journalists and their gear in many countries these days. (No, you wouldn’t really be surprised, would you?).

But wait, there’s more! Even though I had permission to film our doctors filming their doctors doing surgery, the Hospital didn’t want me photographing patients…the very people I needed to put a human face on the story!

So, now I was going with not one, but both hands tied behind my back.

But before we go into solving those problems, let’s deal with the gear choices first.

Everybody loves the look of big, chip, narrow depth of field video, but when you’re shooting run and gun documentaries, a small chip camcorder with power zoom and the ability to keep everything in focus all the time is ideal. I couldn’t bring a shoulder mounted camcorder though, so I went with a remarkable HD palmcorder from Sony, the recently-discontinued PJ790.

(If you want a current camera that does the same thing, check out the professional version of this camera, the HXR-NX30.)

In its tiny body, it houses everything you’d need: headphone and mic jacks, a lot of manual controls, a remarkable and unique stabilization system (I’ll discuss Balanced Optical Steadyshot in another post about shooting aerials, but basically, the lens and sensor are mounted on an interior gyro stabilizer built into the camera body! ), a built-in, 96GB flash memory, and wait for it, a built-in little projector for viewing footage!

For sound and grip equipment, keeping it light was also imperative. Here’s a quick look at that gear: 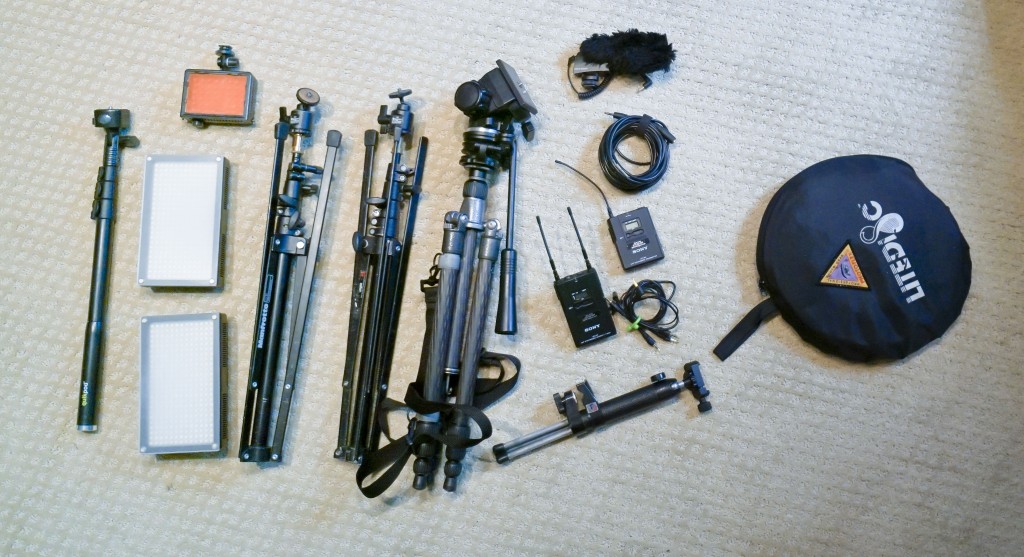 So, what you’ve got there are two 312 LED panels, one small Litepanel LED, one of those “selfie-poles” that an act as a short boompole, two compact Manfrotto stands, a Gitzo Traveler tripod with lightweight SLIK panhead, a Sennheiser MKE 400 mike with a long extension cord, a discontinued Sony UXP-1 Wireless setup, a small table top tripod and a 22″ LiteDisc. Not pictured is my Gitzo monopod adapted with a Manfrotto three-footed fluid cartridge.

So we got through customs in a breeze with this stuff wrapped in tee shirts and underwear in our non-descript duffels. The rest of folks on our team, those with the specialized medical filming gear all packed in big orange Pelican cases? Not so lucky…took them hours, almost a whole day,  and several phone calls to the hospital to get through.

The Hamlin Hospital gets tons of media through, and because of that, they have written up those tough filming guidelines to protect the patients from run and gun journalists doing slapdash stories. But because we were basically a group of doctors helping out, the longer we stayed, the more relaxed the patients, and the hospital administration, became about my filming.

So by day three, I more or less had run of the hospital, and I had picked up two helpers, a pair of adorable little girls who just thought that my cameras  and I were the strangest and most fun thing that had come through there in ages. And every day, I had to take pictures of them in new outfits. And like a lot of people I’ve bumped into over the years, they couldn’t resist art directing me:-)

In the morning, I might catch a surgery and shoot the team shooting the surgeons, in the afternoon, I’d hang around the hospital, waiting for the key docs to be freed up for interviews, and shooting a lot of B-roll of the hospital staff at work and the ladies, many of whom had become so comfortable with me that they insisted that I shoot footage and pictures of them…each and every day!

This was a welcome change from Day One, when everyone seemed to duck for cover when they saw me. But I think they sensed that this team was doing important work, and that the Santa Claus dude with the cameras was good for a laugh or two.

For the structure of the film, I wanted to hew to the teachings of my story gurus, Bob Sacha and Michael Rosenblum, and trace the journey of one patient from her village, to the hospital, getting an operation and going home.

In other words, I wanted to tell the story with a single appealing protagonist, who goes on a journey, overcomes an obstacle, and has a resolution and learns a lesson or is changed in some way. Basic Greek mythology stuff that still works.

But, despite months of emails trying to arrange that,  it was not in the stars…without an advance team on the ground, it was too difficult to find the right person, and even if we could, the process we wanted to film might actually take months. So I had to improvise.

So we went with a more broadcast type approach with a host and interviewees explaining the fistula problem, and then showing the making of the training module.

Fortunately for me, besides being a wonderful doctor and great guy, Dr. Al is also superb in front of the camera, and so he acted as host for the piece. (And I swear, he is better on his feet than most network correspondents.)

Originally, I thought that built-in projector thing on the PJ 790 was totally a gimmick.  But then I saw how useful it could be. It was a great way to share the “rushes” of the day with the team in the lounge of our guest house in the evenings.

Especially when I got roped into filming a couple of surgical “how-to” sequences (“hey, that wasn’t in my job description!” is apparently not an acceptable excuse with this crew of docs!) that the fiber optic cams couldn’t quite get with their weird little lights, and the docs wanted to check out their “technique” and make sure I had caught it properly and in a way that could be used in the training.

For me, that was the toughest part of the assignment, because I couldn’t close my eyes at the sight of blood (my usual MO when shooting in ORs:-) and I had to actually watch what I was filming (insert joke about how most of my pictures and framing already look as if I shoot blind….go ahead, I’ll wait).

After every one of those sessions, this is what I needed to do until my stomach  settled again…and I learned of yet another profession, surgery, for which I was not cut out. 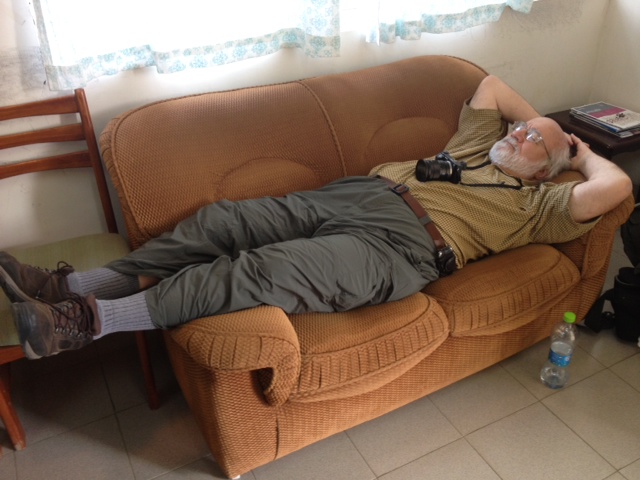 The video was a success (thanks largely to the efforts of crackerjack editor John C. Campbell) and helped raise enough money to fully fund the project, which is just in the final approval process from the surgeons and will soon be in the hands of doctors in training all over Africa.  And me?  I still can’t stand the sight of blood, but I’ll follow Dr. Al Ruenes anywhere!

2 thoughts on “Going Stealth in Ethiopia”